Velasquez Dreamed of Becoming Somebody

Nobody is ever happy. Take Diego Velasquez.

He could paint better than anyone. All the painters in Spain envied him.
Here is one of his early works, a boy and an old woman in the kitchen cooking eggs. 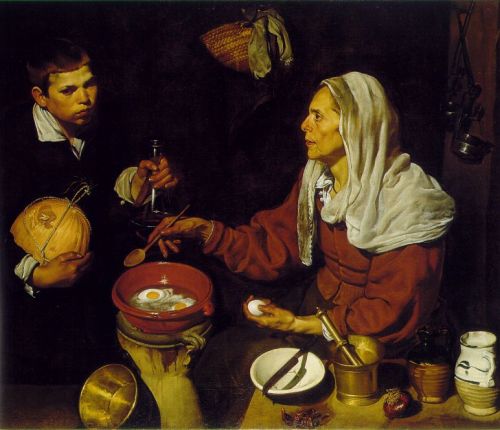 Before he was even twenty-five he beat all the masters in a contest and became the king’s painter. He and his family moved into an apartment next to the royal palace in Madrid and received a royal salary.  Diego hurried out to buy a carriage and hire some servants.
That, when most of the country, including many painters, were living well below the poverty level.

Here is a boy delousing himself  in Velasquez’s hometown, Seville. The painting is by his contemporary Murillo.

And his good fortune didn’t stop there.  He became the very king’s friend. They used to sit and chat. Not even many of the highest nobles could brag about a privilege like that. Palace servants and great nobles alike would watch Velasquez walk right through the palace and into the private quarters of King Philip, the most powerful man in Europe. Or they would see the king make his way to Velasquez’s studio, to watch him paint.

Velasquez made this portrait of his friend, King Philip IV 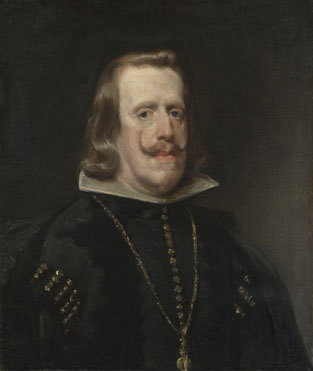 Yet Diego got used to being gifted and lucky.  He wasn’t satisfied.   He wanted to be a gentleman too. It didn’t matter that he was a world-famous painter and an intelligent and cultivated man. In the Spain of his time you had to be a nobleman to be respected.   He climbed ranks in the palace service. First he became one kind of servant and then another. But that was merely rising in the “firm”.

What he really needed was a title. How do you get a title? You have to show that one of your ancestors was a nobleman. Diego spent a lot of money over many years digging up old papers and getting reports from friends and relatives but he couldn’t find a single aristocrat in his family tree.  When his nobility application stalled, he went to the king.  “Could you help me, Majesty? I’d like to become a  Knight of St. James.”

Though the king was the king and the highest-ranking nobleman, even his good word was barely enough to make the bureaucrats waive the noble ancestor requirement for Diego. And it was only in the last year of his life that he became a Knight.

One of his last paintings was this one, called Las Meninas (the Maids of Honor). He shows himself painting a big portrait of the king and queen (standing where we viewers stand, outside the picture) and surrounded by members of the royal household.

It is his biggest and maybe his only self-portrait.  He stands full-length. Perhaps now he was finally proud enough to put himself in a picture.
After he died, someone (his son-in-law?) painted the cross of St. James on Velasquez’s doublet.  The great painter was at last a certified gentleman.

This is a  statue of Velasquez at the entrance to the Prado Museum, Madrid: 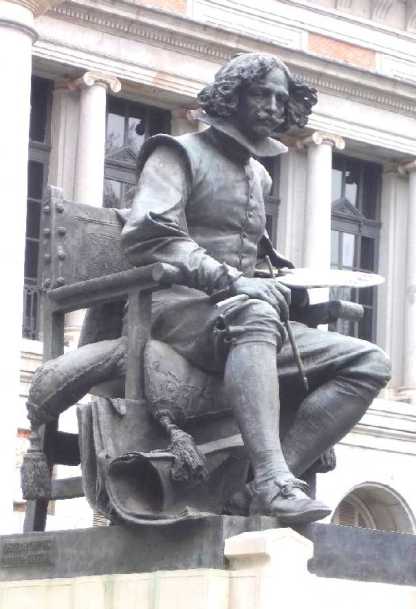 31 Responses to Velasquez Dreamed of Becoming Somebody