Consider this picture of Calumny (Slander) by Botticelli: 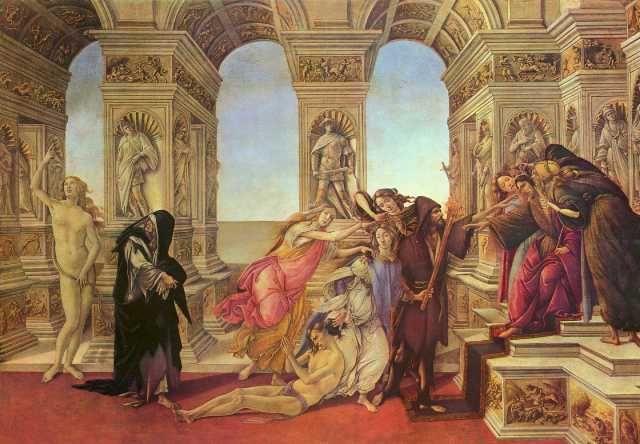 A judge is hearing a case. Two advisors, Ignorance and Suspicion, fondle his donkey ears.

Detail 1  of Calumny of Apelles

Envy steps forth to make his case, leading the beautiful Calumny (Slander).

Detail 2 of Calumny of Apelles

She drags in the naked Victim (the Slandered Man) by his hair.  Frowning in misery and incomprehension, he turns to heaven for consolation.

Grim Penitence stalks before him and turns to give an annoyed look at Truth, who  stands at the end of the queue, hidden from the judge.

Detail 3 of Calumny of Apelles

You don’t need to be a Renaissance artist to commiserate with this victim. Everyone knows about these characters and has seen them perform.

Botticelli, the artist, was slandered. Perhaps he was a slanderer too. His biographer, Vasari, says he accused a friend of heresy “for a joke”. Vasari tells the mean story also just for fun—the fun of printing the friend’s reply to the tribunal. Botticelli had told people he believed the soul died with the body. “Oh, I can believe that as far as HE is concerned,” said the friend. “Because he’s not a human—he’s a brute.” And for further kicks, Vasari throws in the friend’s next dart: “And anyway, Botticelli barely knows how to read or write and he goes and does a commentary on Dante, which is taking [the great man’s] name in vain.”

Too little is known about Botticelli, which is a shame because he was one of the greatest artists.  Most of what we do know comes from Giorgio Vasari, who didn’t like him. He tells cattish stories like the one above and gives the impression when he does praise Botticelli’s work that he is struggling to be fair, no more.

“He was one of the followers of Savonarola [the Dominican friar who preached hellfire and brimstone],” says Vasari, “…and he remained an obstinate member of the sect, becoming one of the snivellers, as they were called then, and abandoning his work.” See how unstable he was? Unstable and irresponsible. Who was going to take care of him once he stopped working? “As an old man he found himself so poor that if Lorenzo de’ Medici…and then his friends and other worthy men who loved him for his talent had not come to his assistance, he would almost have died of hunger.”

As an artist, Botticelli was on the wrong side of history. He painted in a style that Michelangelo made obsolete even before Botticelli was old. The frescoes by both in the Sistine Chapel are the most graphic example. Botticelli’s look as though he had painted them with one foot in the Middle Ages, though in fact he finished them only twenty-five years before Michelangelo set to work there.

Sandro Botticelli, The Temptation of Christ, on the wall of the Sistine Chapel, Rome (public domain photo by Italiamoderna)

But he deserved better. When he was good he was very, very good.  His Birth of Venus is probably his best-known work.

Venus resembles Truth in the Calumny painting because they both are take-offs on the Medici Venus, which Botticelli studied at his patron’s palace.

Botticelli painted some of the most beautiful woman’s faces in painting history but their bodies look very odd.

Some people complain that Michelangelo made women look like men but most painters before his time studied only men’s bodies from live models. For women they relied on old paintings and statues. When they had to create a woman of their own they painted what they imagined was under those flowing dresses. Botticelli could never decide just where to place the breasts, and in his mind the concept of a woman’s womb seems to have made him see a permanently large chamber there.

He stuck to their dresses, of which he made beautiful graphic flourishes. His light, swirling,  three-segment gowns became standard angelwear for centuries. 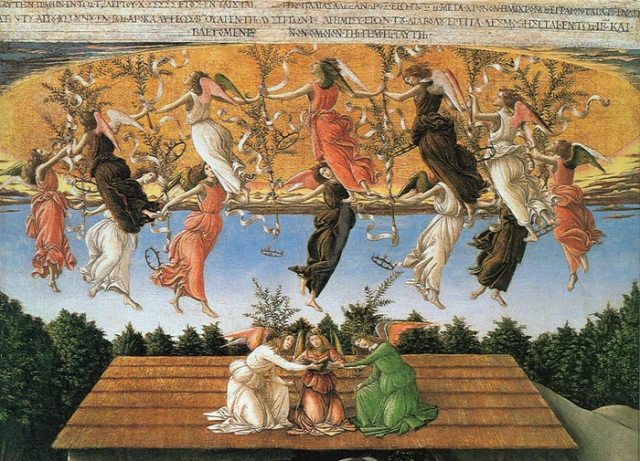 12 Responses to Slander by Botticelli