No one knows exactly what it looked like—a giant equestrian statue in honor of the Duke of Milan. It was Leonardo’s idea. “I will make the greatest statue in Italy to honor your deceased father,” he told Ludovico Sforza. “Just wait and see.”

Here are some sketches Leonardo made for a later monument (Trivulzi): 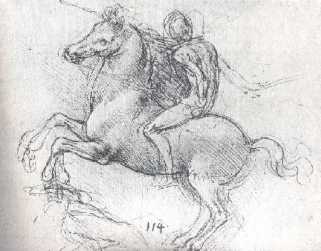 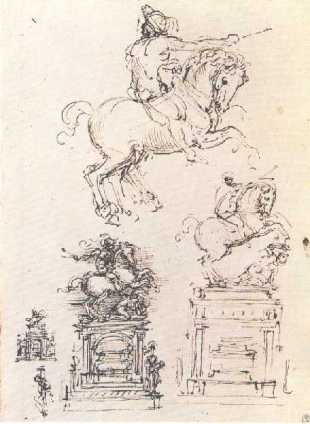 He would have liked a rearing horse. Sculptors had always had to give up that tempting idea because of the support problem. Leonardo’s clever solution would have been a cowering enemy soldier under the horse. He would actually hold it in the air with his raised arm.

But after thinking about it and making dozens of drawings, Leonardo probably realized he wouldn’t be able to bring it off, and he brought the horse down. 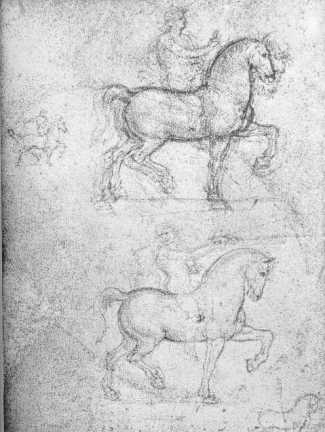 Once he had a little model he liked, he erected a huge wooden framework many times its size, dressed it in clay, and began modelling.
“Those who saw the great clay model…considered that they had never seen a finer or more magnificent piece of work,” says Vasari.

But the real problem wasn’t the clay figure, however large. The real problem was casting the figure of the horse in bronze.
“He carried the work forward on such a scale that it was impossible to finish it,” says Vasari. “This was because it was so large that it proved an insoluble problem to cast it in one piece.”
Why Leonardo insisted on casting it all in one piece no one knows. Perhaps Vasari was wrong.
Leonardo made drawing after drawing, trying to imagine how to support the figure inside and out and where to place the pipes so that the liquid bronze would flow properly inside the mold.

But he couldn’t work it out. Time passed and the statue stood around. Too long. “There have even been some to say that Leonardo had no intention of finishing it,” says Vasari. “And seeing that so many of his works remained unfinished, one can realize why, the outcome being what it was, many came to the conclusion they did. …As our Petrarch has said, the desire outran the performance.”

His enemy Michelangelo heard about this and huffed. It confirmed his idea of Leonardo, the eternal horser-around who could impress with his big ideas but never really bring any off because they were just wishful thinking. Michelangelo had to go through the agony of casting his own big portrait of Pope Julius in Bologna and he knew what casting was. His technicians ruined his figure and he had to model part of it over again.

“It was preserved until the French [soldiers] came to Milan under King Louis and smashed it to pieces.” You couldn’t beat it [miss it] as a target for small artillery or a hip-shot with a rifle after a swig of wine. Leonardo was no longer living in Milan. He had fled years before when the city was threatened by a French army.

The problem of how to make a huge statue of a rearing horse wasn’t solved until the seventeenth century by Pietro Tacca. This spectacular equestrian statue of the Spanish King Philip IV, based on a painting by Velazquez, claims to be the first. It stands in front of the Royal Palace in Madrid.

How did Tacca manage it? The legend goes that Galileo himself told him how: “Make the front part hollow and the back part solid bronze.”