This Is the Great Goya

He’s doing your portrait.
You have just walked into his studio and are standing where he showed you, in front of that enormous window—one of the biggest you ever saw in 1795.

He stands right in the light, so until your eyes adjust, he’s just a silhouette. Little by little, while he takes little nervous steps back and forth in front of the canvas and makes little sweeps with his painting brush, you start to make him out.

He is short and probably a little chubby, though it’s hard to tell because for this portrait he put on that bolero jacket and pulled those striped leggings over his breeches.   Painters often put on their most extravagant outfits for a portrait for color and interest.  But this jacket looks very much like a belly screen.

And that weird hat?  What’s that all about? 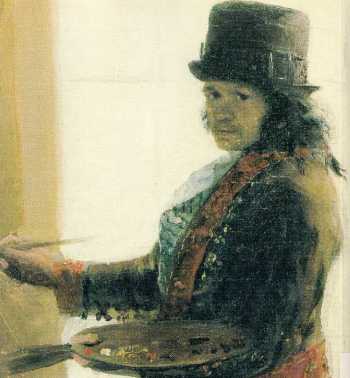 He sees you looking and stops to explain. He explains by acting and gestures. Ever since he went deaf the cat got his tongue. He picks up a candle and  sticks it onto one of the prongs around the rim, to show you.  “I paint at night,” he finally says, and goes back to his canvas as soon as he sees you understand.
His son Javier wrote: “My dad used to put on the final touches of a painting, for greater effect, at night, with artificial light.”

But now it isn’t night.
Well, it happens to cover up the bald top of his head. The long hair dropping out underneath would throw anyone off, too.

The palette with his favorite colors is the real thing.  Earth colors, just ten. With those he could do anything he wanted to.

Now he’s doing a  full-length portrait of you—look at the size of his canvas. The beautiful Duchess of Alba stood right where you are standing and watched this same Goya (hatless?)  paint her.

The Duchess of Alba by Goya (public domain photo)

He literally painted her, by the way.  In her capricious way, she walked over to Goya’s studio one morning before a party and asked him to paint her face. Goya was so excited afterwards that he wrote his friend:  “I bet you’d like to come and help me paint [the Duchess of] Alba, who came in here yesterday asking me to paint her face—and she got what she wanted. By the way, I like that much better than painting on canvas, which I will do too, as I have to do a full-length portrait of her as soon as I finish one of the Duke of Alcudia on horseback [Godoy, the most important man in the realm at the time].”  Goya is bragging a little to his friend. The country kid has made the bigtime.

Writing wasn’t his metier.  He was awkward at it and ended even this choppy letter with a drawing—a caricature of himself.  “I’m like this,” he says. He was always making fun of his own flat nose and here he makes his face into a crescent moon.

A caricature of himself by Goya (public domain photo)

He may not have spoken much anymore, and he hated to write.  But he was all the same the greatest communicator of them all.  Few men in any time have been able to bring out of themselves and show so much of a deep and complex world.

16 Responses to This Is the Great Goya