Is this Alexander the Great’s tomb?

No.  They call it the Alexander Sarcophagus because the relief that decorates it is about him and his soldiers.

That’s Alexander on the beautiful horse, with a lion-skin for a cap. 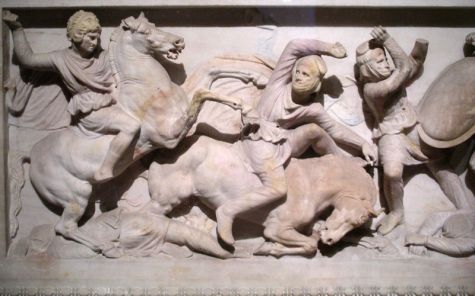 He is spearing a Persian soldier during the Battle of Issus. His little metal spear and the horse’s bridle were stolen long, long ago.  There are impressive battle scenes on two sides of the sarcophagus. 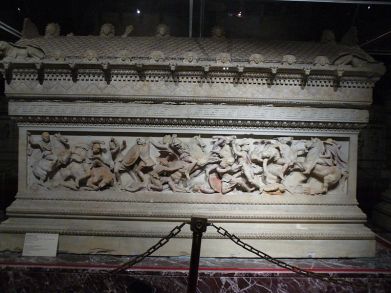 And on the other two there are hunting scenes.  Alexander’s Greek soldiers are hunting lions and deer.

If it wasn’t Alexander’s tomb, then whose was it?
No one knows—perhaps a king of one of the new territories (Sidon, in present-day Lebanon) Alexander had recently conquered.  The sepulchre was carved just a few years after Alexander’s death.  It got buried and was unearthed only in the nineteenth century.

Where is it now?
In the Archaeology Museum of Istanbul. They call it the Mona Lisa of their “Louvre”—their most spectacular piece.

The sculptor, whoever he was, was one of the best there ever was. Relief sculpture has its own problems and this man solved them all with a magic touch.
Then either he or some other craftsman painted the figures. The colors are mostly worn away but a modern scholar recently made plaster copies and painted them with what he believes are the original colors.  This is his version.

See more on these and other painted Greek statues here.

Read more on the Alexander Sarcophagus at the Istanbul Archaeological Museums page.

Didn’t Alexander the Great have a sepulchre?
Yes, in Alexandria, Egypt, the city he founded.   When Caesar Augustus was there 250 years after Alexander died, the Egyptians opened it and showed him the remains of the great conqueror.
See that story here.

7 Responses to The Alexander Sarcophagus