An Inquisition Trial by Goya 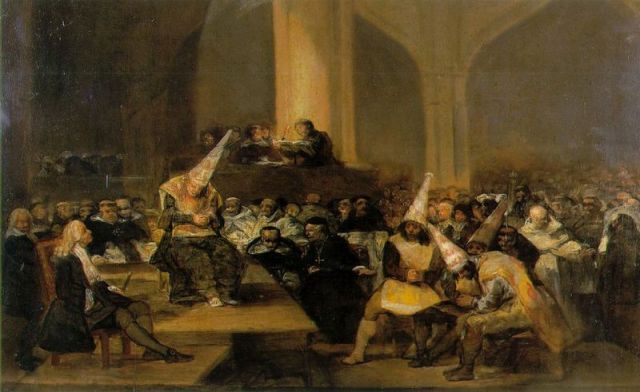 Goya  must have actually seen this, though the Inquisition was gone temporarily when he painted the picture. King José, Napoleon’s brother, did away with it.  (It would come right back with the Bourbon king soon. The Inquisition was a political instrument.)

The trial takes place in a dark, church-like hall, where the heat and breath of the crowds rises in a kind of fog. Those judgments were public and drew big crowds. Notice the cleric on the highest platform reading aloud the charges against the accused from his big book.  You can almost hear his monotonous clerk’s voice.

The man on trial, like the other criminals, is wearing a sambenito, the  clown-like clothing of the condemned, which included that dunce cap. He is broken, he has surely already been tortured, the blood drips from his head somewhere. The other condemned are scared, horrified at what is coming.  No doubt more torture or the death penalty.

The calm, superior,  relaxed interrogator, not a clergyman, is asking tricky questions that the accused had better answer in a way that pleases those clerical judges conferring at the foot of the platform. With their keen, trained minds they confer on some point of law or theology. How could Goya get those faces so right? He couldn’t keep from putting an overweight friar among the judges and letting his sympathies (or antipathies) show.

You might think of Goya as the first great reporter—a kind of picture journalist, though he didn’t paint for any newspaper and he didn’t post his pictures in public. And unlike a journalist with his camera, he reinvented the scenes from memory. Everything in his picture is his—every single line and fleck of color was his own invention.  It was all comment, one hundred percent.

18 Responses to An Inquisition Trial by Goya