Michelangelo’s Agony in the Sistine

They told the greatest sculptor to go paint

He suffered unspeakably  in that chapel. There were about eleven thousand square feet to paint and he was not a painter but had to obey an order given by the Pope.
He sat on the wooden plank of the scaffolding up in the air with his legs dangling and worked looking up. All the time he rubbed his neck, it ached so. For fun he drew a little caricature of himself painting a saint on the ceiling, his head bent back as far as it would go.

Vasari, who had done some fresco painting himself, marvelled at the way Michelangelo held up through the long ordeal:
“He executed the frescoes in great discomfort, having to work with his face looking upwards, which impared his sight so badly that he could not read or look at drawings save with his head turned backwards; and this lasted for several months afterwards.  I can talk from personal experience about this, since when I painted five rooms in the great apartments of Duke Cosimo’s palace if I had not made a chair where I could rest my head and relax from time to time I would never have finished; and even so this work so ruined my sight and injured my head that I still feel the effects, and I am astonished that Michelangelo bore all that discomfort so well.”  (Life of Michelangelo, Vasari)

Working on wobbly boards sixty feet in the air is a tricky business. You have to organize what little space there is to make room for everything: your baskets of sand and lime, your bucket of clean water, your colors and your brushes. Somewhere at hand, maybe hanging over the wooden railing, is your cloth cartoon. When you finish with each instrument, mind where you put it down. Did you leave the darn trowel in the bucket with the lime or is it somewhere under your foot or behind you?  If it falls down through the planks, that means interrupting the work for ten minutes or more while you climb down after it.  Or is it in one of your pockets?

At least it was his scaffolding.  The Pope had ordered his chief architect and Michelangelo’s arch-enemy Bramante to set one up for him, and Bramante had gone and drilled holes in the ceiling and driven in hooks. The idea was to hang the scaffolding from those hooks with ropes. “But once the painting is finished what am I going to do about the holes in the plaster where the hooks were?” Michelangelo asked him.
“We’ll think about that when it’s time.”
That arrogant and stupid answer made Michelangelo so angry he went to complain to the Pope. “Do it your way then,” said Julius.
So Michelangelo got rid of the hooks and the ropes and built a scaffolding that stood on the ground.

He worked alone. He wanted it that way.  At first, since he had never painted in fresco, he had asked some of his friends in Florence who were fresco painters to come to Rome and show him their technique. “Here’s my cartoon,” he told them. “Now show me how you would paint it on the ceiling.” They mixed up the lime and sand, giving him precise instructions and warnings. Michelangelo watched them without saying anything. From the first he had his misgivings.

Next the whole troop climbed up his scaffolding like monkeys with the buckets of sand and lime and water, and the colors and brushes.  They joked about who would start but finally gave the trowel to Granacci, who spread the first quarter-inch layer of mortar on the ceiling and began tracing Michelangelo’s cartoon.  Michelangelo watched with his mouth closed tight and a bit of a scowl.
For a week Michelangelo let them copy his cartoon. Now and then he couldn’t restrain himself and  took the brush away from one of them and corrected a line or a color. He even painted a few of the figures himself. The first fresco was this picture of the Great Flood. 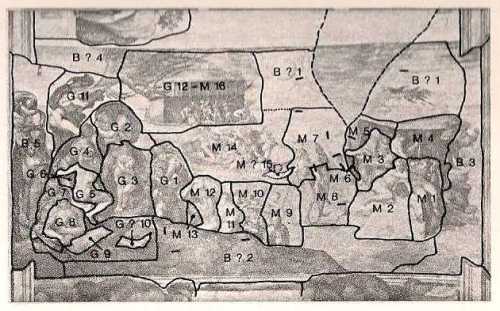 His friends worked more like employees than like artists who were their own masters.  They gave themselves frequent breaks and goofed around.  Michelangelo thought their serious talk was not much better than their jokes.
One day he had taken the brush himself and was at work, in deep concentration.“Oops!” one of them said,  “breaktime!” And they all scampered down the scaffolding to find their bread and onions. “Aren’t you coming?” they called up to Michelangelo.  He didn’t answer.

When they returned he made his announcement: “Boys, I’m sorry but I don’t like what you are doing.” He had seen them horse around too long and he couldn’t take it anymore. He was sorry he had asked them to come.  He should have trusted in himself and not expected to learn anything from others. Whatever they might teach him was vitiated by their own shortcomings. “I’ll have to invent my own method.”   And he sent them back to Florence.

The last great trial came after he had finished about a third of the ceiling.  A mold appeared on his frescoes!
“Now…during the winter when the north wind was blowing several spots of mold started to appear on the surface.The reason for this was that the Roman lime, which is white in color and made of travertine, does not dry very quickly, and when mixed with pozzolana, which is a brownish colour, forms a dark mixture which is very watery before it sets; then after the wall has been thoroughly soaked, it often effervesces when it is drying.  Thus the salt effervescence appeared in many places.” (Vasari)

That was the last straw. He ran to the Pope.   “I told you I was no fresco painter,” he whined.  “And now look what has happened. All my work is ruined.”  The Pope sent an expert, Sangallo, to see what was wrong and the man explained to Michelangelo how to remove the molds and encouraged him to continue.

Note:  The little skit with the happy troupe of fresco painters is not in Giorgio Vasari’s Life.

This entry was posted in art. Bookmark the permalink.

21 Responses to Michelangelo’s Agony in the Sistine