It is almost seventeen feet (5.17 meters) tall.
It represents the David of the Bible, the shepherd who killed Goliath with a stone from his sling and afterwards became King of Israel.

David by Michelangelo.  It is the moment before the battle.

Michelangelo carved it out of a block of Carrara marble that was considered worthless. It had been sitting around in a courtyard for years. A bad sculptor had drilled a hole through it and then given up. Michelangelo planned a figure that would fit around the hole and planned it so precisely that he left some of the other sculptor’s chisel marks on the surface.
Michelangelo began to carve it in 1501 and, according to his first biographer, Giorgio Vasari, finished it in only eighteen months. If that’s true, it is almost a wizard’s work.
A conference of artists was held to decide where the finished statue should stand. Among them were Leonardo da Vinci, Botticelli, and Filippino Lippi.

A Symbol of Freedom

They decided to place it at the entrance to the Palazzo Vecchio, the palace and former city hall of  Florence.

It was meant as a symbol of freedom. The people of Florence had bravely stood up to their tyrannical ruler, Perfrancesco d’ Medici, and driven him out. This new David would remind whoever governed Florence in the future that he should protect his people from injustice as King David had done.

In 1872 it was was removed to the Accademia (a museum) and, a few years later, this replica was set up in front of the Palazzo Vecchio .

Michelangelo’s David as a replica at the entrance of the Palazzo Vecchio, Florence.

How they transported it

Moving the huge figure from Michelangelo’s workshop to the town hall square posed a real problem. Two brothers (Sangallo) finally solved it. They constructed a wooden framework and hung the statue from it with thick ropes. That way it swayed while they transported it and so absorbed the vibrations without breaking. The rope it hung from had an ingenious slip-knot that tightened with the weight. The actual moving was done in the traditional way, that is, laying wooden planks down in a path in front of the statue, iron rollers on the planks under the block, and a winch with rope to pull it forward a little at a time.

The David was damaged in 1527 when the Medici were again driven out of the city. Someone threw a bench out of a palace window and broke the left arm. The pieces were collected and restored by Vasari. The joints are visible. 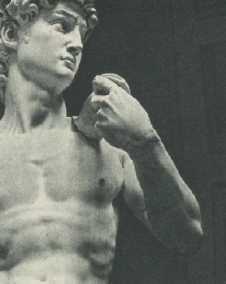 David‘s left arm, showing the joints where the broken pieces were attached.

Great praise and some objections

Vasari says that “anyone who has seen [the David] has no need to see anything else by any other sculptor, living or dead.” That is how highly he and many of his contemporaries thought of it. It was THE statue. A modern critic, Justi, called it “Michelangelo’s most perfect statue of a nude man.”
But not everyone was unconditional. Some thought the David didn’t look young enough. The Bible calls him a boy and this is a nearly full-grown man. Others, like Jacob Burckhardt, thought Michelangelo had made a mistake in trying to represent the figure of an adolescent in colossal proportions. “Only grown persons can be conveniently enlarged,” he wrote.

And there are studies comparing Michelangelo’s David with those by other sculptors. Of these Donatello’s and Verrocchio’s are the most famous.

There were already some fine statues of David in Florence. Donatello, one of the first great Florentine sculptors, made this David around 1445, before Michelangelo was born. It is the figure of a boy—he holds the huge sword he has taken from Goliath—but his body is a curious mixture of boy and woman shapes. Like Michelangelo’s David, it had a political significance. It too celebrated the ridding of a tyrant. 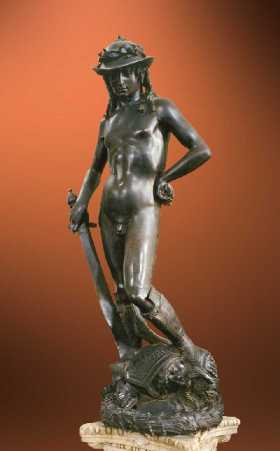 Verrocchio was Leonardo da Vinci’s teacher and a tradition says that Leonardo himself stood as the model for it. He steps lightly around the big obstacle of Goliath’s head. But his face is serious.

When comparing these figures of David you must remember that Michelangelo’s is seventeen feet tall, and in marble. The other two are smaller than life-size and in bronze—a very different technique.
In planning such a giant figure Michelangelo had to try to imagine how it would look from below and at a distance; and he adjusted certain details to “correct” it from those perspectives. The head, for example, is oversized. The right hand was probably kept large and low to emphasize the tilting of the torso, which gives life to the figure.
Unlike all the other Davids, Michelangelo’s has none of the emblems of the Biblical prophet. There is no Goliath sword, no severed head. The sling he holds in his left hand is not recognizable as a sling; and the stone (actually a small marble column) in his right hand is not even visible. In fact, the Florentines of his time never referred to the figure as David but simply as “The Giant”.

The man that could do anything

It was the first of the Titanic figures in stone and paint that Michelangelo created and it could as well stand for the proud, strong, beautiful man of the Humanist philosophers that Michelangelo had heard about as a boy. Or the man of the Renaissance who believed he could do anything.

The artist as a young man

Michelangelo was born in 1475. His apprenticeship began early in life and soon he was sponsored by a powerful aristocrat who had a school and gave his students a Humanist education. Just at that time the Italians started to re-discover and investigate old Roman and Greek culture and there was a lot to learn.

Michelangelo carved the famous Pietà when  was 23  and started his David three years later.

See David and the Bad Block

Michelangelo’s David, in the Accademia Museum in Florence, Italy. A Wikimedia Commons photo by David Gaya under the GNU Free Documentation License, Version 1.2

The replica of Michelangelo’s David at the entrance of the Palazzo Vecchio, Florence, Italy:. Photo by Massimo Catarinella, licensed under the Creative Commons Attribution-Share Alike 3.0

David’s left arm, showing the joints where the broken pieces were attached: a segment of a photo from Michelangelo: Paintings,Sculptures, Architecture by Ludwig Goldscheider, Phaidon, 1957

Donatello’s David photographed by Patrick A. Rodgers under a CC license at

The photo of Verrocchio’s David is in public domain at

The best general sources are
Lives of the Artists, by Giorgio Vasari, first published in 1555.
Michelangelo: Paintings, Sculptures, Architecture by Ludwig Goldscheider, Phaidon,
1957