When Michelangelo was finishing the David, along came Piero Soderini, the town mayor or boss, to have a look. Michelangelo had put a canvas around the scaffolding so no one could watch him work. He didn’t like gawkers and he didn’t like intruders, not even patron intruders. So when he saw that canvas flap open and the mayor come in, though he had to smile, he must have cursed to himself. 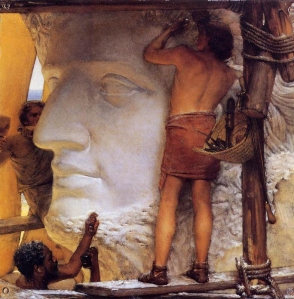 Piero Soderini put on the show of the art connoisseur, walking around under the huge figure. “It’s coming along wonderfully,” said Piero Soderini. “But do you know what? The nose is too thick.” 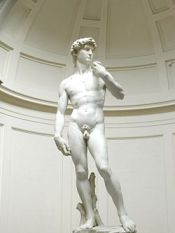 Criticism like that must have made the irascible Master’s blood boil. He knew that from where Soderini was standing it was impossible to judge whether the nose or anything else was right. “Well, we’ll fix that right now,” he said; and quickly grabbing a hammer and chisel, climbed up the scaffold like a monkey. Clink, clink—Soderini heard the hammer against the chisel and saw marble dust fall. Clink some more. “How’s that?” Michelangelo called down from the scaffold. Of course he hadn’t touched the figure at all but only pretended to be altering the nose.
“Oh, that’s much better!” exclaimed the mayor. “Now you’ve really put life into it.”

Vasari says Michelangelo “climbed down, feeling sorry for those critics who talk nonsense in the hope of appearing well-informed.”

Now Soderini was no more of a hypocrite than most; and it’s possible that he was no hypocrite at all when he criticized the nose. It looked too big to him and he said so. Perhaps after Michelangelo had done the hammering, it still looked too big but out of politeness (there are all kinds of hypocrisy) or simple deference towards the man who was supposed to be his superior in this art, he acquiesced.

Piero Soderini might actually be seen to come off better than our hero Michelangelo in this story, who “felt sorry” for the mayor but didn’t say so: he wasn’t that dumb (wink, wink). You don’t bite the hand…..

Why didn’t he explain outright to the man that there at the foot of the scaffolding it was impossible to criticize a colossal figure like the David properly, that it had to be viewed from a distance, and that later when the figure was finished he, Soderini, would see that the nose was right? Michelangelo might have tried. Instead, he instantly conceived and carried out the cheating act to make a fool of him. Maybe Soderini’s airs were hard to take; maybe he deserved it. However it was, Michelangelo was “smart” enough to keep the story to himself while he took two more commissions from the mayor, who, by the way, paid him good money for the David when it was done and ordered it to be set up in the most prominent place of Florence. Later, after Soderini had fled to Rome and was no threat to anyone, the Master confided the mean story to Vasari and Condivi. As long as the mayor was handing out big marble blocks and awarding commissions, Michelangelo kept smiling and showing respect. Funny. Wasn’t our Michelangelo the man who didn’t let himself get kicked around; who spoke his mind frankly? Sometimes, depending. This Soderini story is plain back-biting.

This post, entitled His Nose Is Too Big , was originally published on September 22, 2007