Michelangelo always considered that his greatest enemy was the architect Bramante.

He believed Bramante wronged him at least three times. First, Bramante talked Pope Julius out of building his tomb. “It’ll bring bad luck, Holiness,” he told him. This was the greatest disappointment of Michelangelo’s life and the cause of trouble and worry for years. Julius had already approved his magnificent design and Michelangelo had spent months quarrying the marble for the statues. He had even set himself up near St. Peter’s and started carving.

Next, Bramante talked the Pope into giving Michelangelo the commission to paint the vault of the Sistine Chapel.  Michelangelo was a sculptor, not a painter, and a project like that meant very evident failure if he couldn’t master the art of fresco painting. He hated the prospect and tried to refuse but ended up having to obey the Pope.

And finally, once Bramante saw that Michelangelo was successful as a painter and earning praise for his spectacular paintings in the Sistine, he tried to have the job taken away from him and given to his protégé and fellow townsman Raphael of Urbino.

Why was Bramante so mean? According to Michelangelo’s apprentice and biographer Condivi, who had often heard his master complain around the shop, Bramante was jealous—jealous and afraid. “…Bramante was prompted by the fear he had of the judgement of Michelangelo, who kept discovering his blunders.” (Condivi, Life of Michelangelo, Pennsylvania State University Press, 1999, p. 33) And not just blunders. “Bramante… tried to gain advantage [i.e. to save money for his pocket] in his buildings by making the walls of poor materials and inadequately strong and secure for their size and extensiveness. This is obvious for everyone to see in the building old St.Peter’s in the Vatican, in the Belvedere Corridor, in the monastery of S. Pietro in Vincoli, and in his other buildings, all of which have required new foundations and reinforcement with buttresses and retaining walls, as if they were falling or would shortly have fallen down.”

“Now, because [Bramante] did not doubt that Michelangelo recognized these misdeeds of his, he constantly sought to remove him from Rome, or at least to deprive him of the Pope’s favor and of the glory and reward he might acquire by his industry.” Then why did Bramante suggest to the Pope that Michelangelo paint the Sistine vault? “They [Bramante and other rivals] were doing this service with malice,” says Condivi, “in order to distract the Pope from projects of sculpture, and because they took it for certain that either [Michelangelo] would turn the Pope against him by not accepting such an undertaking or, if he accepted it, he would prove considerably inferior to Raphael of Urbino, whom they plied with every favor out of hatred for Michelangelo… ” And as soon as he had seen the ceiling Raphael of Urbino “sought through Bramante to paint the rest himself,” says Condivi.

Was all this so? Is there any proof that those men, Bramante and Raphael, two of the greatest artists of the Italian Renaissance, were such scoundrels? No. The scholar Helmut Wohl thinks such a clear vision of the Diabolic Duo came from the imagination of Michelangelo. 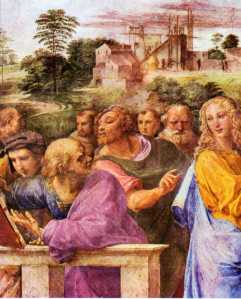 Bramante by his friend Raphael, a fresco in the Stanza della Segnatura, Rome

“It is very improbable,” he writes, “that Raphael wanted to finish the Sistine ceiling. Condivi’s references to Raphael as well as to Bramante were motivated by his loyalty to his master and should be taken in the context of Michelangelo’s belief, expressed in a letter of 1542, that ‘all the discords that arose between Pope Julius and me were owing to the envy of Bramante and Raphael of Urbino; and this is the reason why he did not proceed with the tomb in his lifetime, in order to ruin me. And Raphael had good reason to be envious, since what he knew of art he learned from me.’” (Wohl, in his notes to The Life of Michelangelo, Condivi, p. 133).

Part of the reason Condivi wrote a biography of his master was to let the world finally know what Michelangelo had had to suffer because of his enemies. He had heard him dozens of times on the subject. At sandwich time in the workshop he must have told the wide-eyed Condivi something like this: “When I heard that Bramante was trying to get his buddy Raphael to take over the Sistine ceiling, I saw red. That was the last straw. I think I busted the paintbrush I had in my hand. I ran over to the papal palace without even changing my clothes, paint-stains and all, and insisted on seeing the Pope right then. The Pope was surprised to see me storm in like that. And do you know what? That old Bramante happened to be there with him. Well, I was happy he was. I was glad for the chance to tell Julius right in front of him every last bit of evil the S.O.B. had ever done me and to let him know just what kind of architect was advising him…” Condivi wrote down Michelangelo’s story like this: “This [suggestion that Raphael should finish the ceiling] greatly disturbed Michelangelo, and before Pope Julius he gravely protested the wrong which Bramante was doing him; and in Bramante’s presence he complained to the Pope, unfolding to him all the persecutions he had received from Bramante; and next he exposed many of his deficiencies… so that, when the Pope had heard of these derelictions, he wanted Michelangelo to continue, conferring upon him more favors that ever.” (Condivi, p 57.)

But—surprise!—what did the old Michelangelo scribble beside this paragraph in Condivi’s book? “Oh I never said this, nor spoke badly of anyone to the Pope or to others.” (Condivi notes, p 134.) Why would he deny it all once Condivi had put it in writing? One, because he realized he might well be making unnecessary trouble for himself; two, he had no proof for these accusations; and three, he thought Condivi’s devil-painting had gone too far (Julius, Bramante, and Raphael were all long since dead) and revealed a vindictive, less noble quality to the portrait of himself he was directing. Revenge on long-dead enemies is not only unsatisfying: it is ungracious. .. ..

This entry was posted in art. Bookmark the permalink.