When John Constable was a boy he went for walks in the the Suffolk countryside. They were the most exciting thing he would ever do.
“There was a time when meadow, grove, and stream,
The earth and every common sight,
To me did seem
Appareled in celestial light,
The glory and the freshness of a dream.” That is what Constable’s friend Wordsworth wrote when those same sights no longer moved him, Wordsworth, that way, and it distressed him.

Constable tried to sketch all the wonderful things he saw. And later when an art collector showed him this Hagar and the Angel by Claude Lorrain, the young Constable knew that he wanted to become a painter.

Hagar and the Angel by Claude Lorrain (Wikipedia file photo)

There was something truer in Claude Lorrain’s paintings of nature than in any he had ever seen. There was just that stillness—that sacredness—he felt while lying in the grass or sitting by his father’s old mill, watching the great clouds build for a storm. Before Claude many had painted scenes of the countryside but they were all false. Those painters had never really gone outside and looked at woods and lakes. Poussin had been praised for his pastoral scenes but they looked like this: 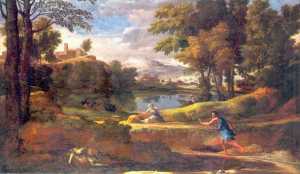 His trees didn’t look like trees, the lakes like lakes, the mountains like mountains—even the blockish buildings looked phoney. Claude Lorrain was the first to give you the real feeling of nature—or some of it. Constable thought he might be able to do even better.

He enrolled in the Royal Academy Art School and learned how to paint. The first paintings he did were imitations of revered masters like Ruysdael, Annibale Carraci, Gainsborough, even Rubens. But soon he told a friend it was time for him to do his own thing. “For the last two years I have been running after pictures, and seeking the truth at second hand. I have not endeavoured to represent nature with the same elevation of mind with which I set out, but have rather tried to make my performances look like the work of other men…There is room enough for a natural painter. The great vice of the present day is bravura, an attempt to do something beyond the truth.” And he set about re-creating those scenes that burned in his memory; such as this one:

Here was Constable finally “representing nature with the elevation of mind with which he had set out”. The scenes are daydreams of the lost world of childhood and an attempt at moving the viewer as Constable was moved as a boy.

“The Child is father of the man;

And I could wish my days to be

Bound each to each by natural piety.” –from My Heart Leaps Up When I Behold by William Wordsworth

He spent hours outdoors with his sketchbook and even his oil paints.The sketches themselves were the first anyone had ever made in oils outdoors directly from the subject. He invented new techniques. He broke up the surface of his meadows by applying different tones, broken brushstrokes, and small flecks of pure color, like the French Impressionists fifty years later. After seeing his work in Paris, the painter Delacroix repainted the background of one of his pictures. “The green of his meadows can be applied to every tone”, he wrote.
Those studies and sketches prepared him to do the vast, moody Chain Pier:

To make the viewer feel his own veneration for nature he overrode one truth (exact copy) with another (feeling) and came up with an exaggeration like this one: 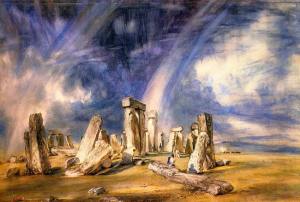 Here is another fine painting in the Thyssen Bornemisza Museum in Madrid: it is called The Lock (or Floodgate) 142cm x 121 cm (Visit museum page)