What is this? Who is that burly guy and why is he carrying an old man?

The burly guy is Aeneas, the legendary founder of Rome; and he’s caring his dad, Anchises. They are getting out of Troy, their home, as fast as they can because the city is on fire.
The little boy is Aeneas’ son, Ascanius.

Those are the penates, the home-gods that watch over you. Every household had some in a niche in the hall. They were what you grabbed to take with you when you could take only one thing. They would protect you and your family.

Who made the statue?

Gian Lorenzo Bernini. He carved it when he was only twenty. It is in the Galleria Borghese, Rome.

But what is the story?

It is a side-story in the Trojan War legend, the subject of the Illiad, Homer’s great epic poem. The Greeks all knew this and many other stories from that idealized history of their country. The Greek version of this one ended with the flight of Aeneas, a prince of Troy, and his family.

Aeneas and his father as depicted on a Greek vase

When Rome was inventing its own history years later and looking for a founder, it took up this Aeneas thread. Roman historians thought they couldn’t do better than the old Greek legends. Monkeying the story of Ulysses, who after the Trojan War was kept wandering around the world because of the curse of an angry god, they said Aeneas and his family were made to wander around the Mediterranean after leaving Troy because of the curse of an angry goddess. The hero was not able to settle down until, after years, he reached Latium, the place that would become Rome. Anchises died along the way. Aeneas’s wife did too. Eventually Aeneas became king of the Latins and married a local princess.

But what is Bernini doing with this antique Greek/Roman story? Wasn’t he a Christian?

There was a religious revival in Italy in the seventeenth century when he lived. One of the stock themes of the Counter-Reformation was the triumph of faith over adversity. The old Roman hero had held onto those penates and believed in them and they guided his family safely through countless vicissitudes. He was just the example of piety toward God and toward parents that rulers were looking for. It was a cardinal—Scipione Borghese—who commissioned the statue.

It is an incredibly ambitious work for a sculptor not yet twenty years old. Bernini’s father, who was a master carver, probably helped him—and may be responsible for what now looks like its worst features.

Critics sometimes complain about the group’s troubling instability. They assume Bernini was trying to put figures together like this Rape of the Sabine Women by Giambologna and failed.

Giambologna’s figures show a spectacular upward, spiral movement. They might as well be dancers. Bernini’s group is not only not graceful, it is distressingly awkward. The old man sits very heavily on his son’s shoulders (he couldn’t sit like that for long) and seems about to come sliding down.

True. But the other signs of tension and instability in the statue show that Bernini was trying for just that effect. It was his way of dramatizing. Look at the base. The very least he could have done, say the critics, is to give the tottering group a flat, solid, place to stand. But Bernini goes and makes it rounded!

Well and good, say the critics. But a statue dare not look like it will fall—that’s anti-aesthetic. It troubles the viewer.

“Let him be troubled,” says Bernini. He would do a lot more troubling before he had carved his last statue.

The theme was always a hard one to depict with grace. Here is Rafael’s version. 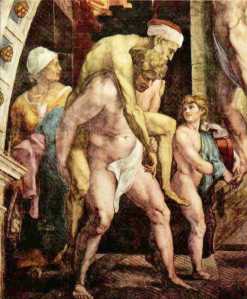 Aeneas is carrying the old man fireman-style and really struggling with the weight.

Bernini’s modelling of the two men’s contrasting bodies is the work of a genius.
But why did he stop with the faces? Why are they so inexpressive? The face of the old man might have been intended to show senility. But couldn’t Bernini have put some tension—some pluck or anxiety—something!—into Aeneas’ face? He is the star of the group, his is the face one consults right off to get a clue to understanding the work. Given Bernini’s aim to dramatize the story, isn’t that a flaw?

Some have noticed the similarity between this Aeneas and Michelangelo’s Risen Christ in Santa Maria sopra Minerva in Rome: 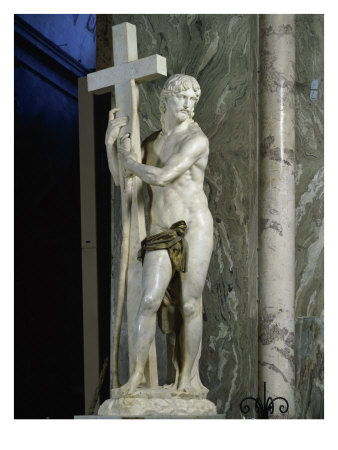 Did the young sculptor try so hard to copy Michelangelo’s famous Christ that he forgot that the face of the Savior did not fit his own figure?

You can be sure Bernini knew what he was doing. The little boy’s face shows fear very well. All the details of this and all Bernini’s works are well-thought-out. Maybe he was advised by his father or the Cardinal to illustrate dignity and courage and faith in this way. “The brave man doesn’t wear his concern on his face the way that little boy does,” perhaps they told him. “He strides through adversity with confidence and serenity.”