Michelangelo’s Stands Up to the Pope

One of the most memorable adventures in the whole Michelangelo legend is his famous flight out of Rome after Pope Julius refused to pay him. 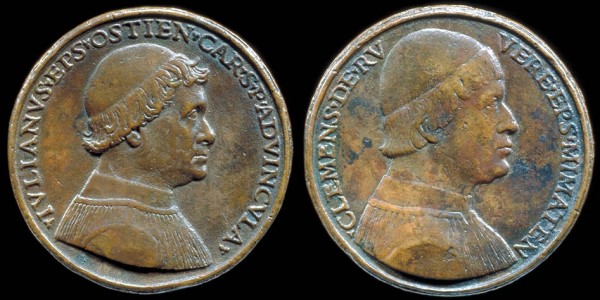 He had gone to see the Pope to ask to be reimbursed for the money he had paid out of his own pocket to the workmen who had brought his marble blocks into St. Peter’s Square. Those blocks were going to become the statues for Julius’ tomb. Up to then he had always had easy access to the Pope’s chambers but suddenly one day he was told that the Pope was too busy to receive him. He went back to the papal palace several times and was turned away each time. Finally a groom told him that he had orders from the Pope not to admit him. This made Michelangelo so uncontrollably angry that he decided right there to quit working for Julius, to sell his things in Rome, and to clear out immediately that night. He would not be treated by anyone like that, not even by the most powerful man in Christendom.

Vasari says Michelangelo set out on post-horses and rode all night until he reached a town called Poggibonzi in the territory of Florence, outside the Pope’s jurisdiction, where he felt safe. But soon five papal couriers turned up with orders to bring him back.

This far the story is the same in both biographies—it anyway follows Michelangelo’s own account which he gave in a letter to the Pope’s representative. Both Vasari and Condivi say Michelangelo, finally caught-up-with and cornered as he was in Poggibonzi, still refused to go back to Rome with those couriers. He was a tough customer, that Michelangelo.

But to make him even tougher, Condivi puts in this: “The couriers had come upon him in a place where they could do him no violence and, as Michelangelo threatened to have them killed if they attempted anything, they resorted to entreaties.” Is that right? Did he? Would he have? Who would do the killing?

After reading Benvenuto Cellini’s autobiography you start to believe almost anything about Renaissance Italy. Men walked around with swords that they really drew in anger occasionally, and daggers too that they unsheathed when a quiet murder was required. The whole country was a jungle with fierce human animals at large. Cellini made glorious reading but you didn’t want to cross him. And now here we have Michelangelo threatening to kill five men, five emissaries of a very Renaissance Pope, if they don’t leave him alone. Liar though that old Benvenuto was, his homicides seem to have been real. Do we take Michelangelo—that is, Condivi his scribe—at his word here?

Portrait of Michelangelo, perhaps based on his death mask. Photo by Giovanni Dall Orto

We should not. Most likely, the threat to kill the couriers was a later accretion to the story as Michelangelo told it over and over again to Condivi. It was warmed-over bluster, meant to show how brave Michelangelo was and how immovable in defense of what he considered right. “I stood up to the whole bunch of them (the couriers),” he told the wide-eyed Condivi at sandwich time in the shop. “I told them I’d kill the first one who laid a hand on me. You should have seen them look at each other. They knew I meant it. None of them was prepared to die—they hadn’t counted on a fight with a lion. They’d figured they would find a whining, penitent, artist-coward, begging for mercy. Well, they saw another side of Michelangelo Buonarroti.”

Vasari passed over this part of the adventure. He evidently did not believe it or felt that it would be indiscreet to put it in his book. It does shock. Michelangelo let it stand, perhaps because he had told it to Condivi so often he felt silly about retracting it. He was strong and proud and he had a temper. He certainly did things he regretted afterwards. But he was afraid of Pope Julius: both Vasari and Condivi say so. Look how he hesitated to go to Bologna to meet Julius finally and receive his punishment. Or how he hurriedly took down the scaffolding and quit painting the Sistine Chapel though he considered his fresco unfinished, because the pope had beaned him with his mace and threatened to have him thrown down if he didn’t.

8 Responses to Michelangelo’s Stands Up to the Pope