“What did Joyce, Stravinsky, and Picasso have in common?

“They had nothing to tell us—or, rather, they didn’t want to tell us anything about themselves and their relation with reality; and, on the other hand, they had a lot to say about art and its relation with art. They were indifferent to the world, to which they denied any participation that wasn’t through art….they substituted the world for a museum and they took charge of its enormous inventory with the aim of appropriation and pillage.

“With the First World War and the consequent destruction of values, all art of the past…was instantly converted into museum. And with museum appears the idea of a relativity of styles, the plurality of forms, and the vanity of expression—ultimately, the idea of consumption understood as the transformation of creation into a product….By treating the art of the past as a mere repertory of manneristic stylizations they made massive sale possible. 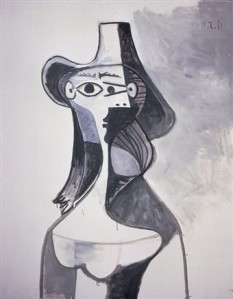 “Thieves of forms, they killed the life of those forms, reducing them to patterns. They closed probably forever the era of artists who had something to tell us. With them begins the great Atlantic-type Alexandrian mannerism based on the consumer societies of Western Europe and the United States; the cemetery-museum-show-market-fair-exhibition-emporium of art definitively condemned to being forever contemporary and vanguard.”

From “The Explosion of Mannerism” –an essay by Alberto Moravia

Moravia is very hard on those three artists. And he is too pessimistic. No one believes artists will go on studying art’s own navel forever. And to tell the truth, not even Picasso did that. His best-loved works all have a sentimental or autobiographical touch to them.

And what about the origin of art’s strange sea-change? It was traditional in Moravia’s time to blame the horrible First World War for a “loss of values”. Afterwards came “the Lost Generation”. But even before the turn of the century Picasso was cooking up his idea of art along with the gang at the Four Cats Café in Barcelona . And he was famous in Europe before the Great War. Look what a critic said about a Picasso exhibition in Paris in 1902:

“Picasso is like a young god bent on remaking the world. But a sullen god: the hundreds of faces that he has painted gesticulate but not one of them smiles. His is an uninhabitable world, his very painting is sick….Isn’t this lad, so troublingly precocious, destined to make a masterpiece of the negative sense of life, of the evil that he himself suffers from, like the rest of us?”