Pope Julius was pleased enough with Michelangelo’s paintings in the Sistine chapel. His uncle Sixtus could lie in his grave with a smile now, knowing that the world had such a monument to him. But what about himself—Julius?

He was getting old and weak and he still didn’t have any impressive monument to himself. St. Peter’s was far from finished and what if after all his grand ideas they finally just stuck him in a niche in the wall like any other forgettable pope? Maybe he shouldn’t have ordered that damned ceiling fresco before Michelangelo had finished his tomb. Maybe there was still time to have him finish it.

So he called in Michelangelo. “Do you think you can still handle a chisel, old friend?” he said with a smile. “I’m still going to need a tomb.”
His voice was weak now—he had aged very much in the last years. He was ill all the time. Death couldn’t be far off. “As you can see for yourself, I’m no longer in condition to handle all the details with you, so I’ve put my nephew, Cardinal Urbino, in charge—he and Cardinal Santi Quattro.”

There was nothing Michelangelo wanted more than to pick up a chisel again. That was all he ever wanted. And the tomb project was the one he loved above all the rest. Many times on the scaffolding in the Sistine Chapel he had dreamed of the lost tomb and sighed to think that such a fine thing was never to be. He had spent hundreds of his best hours thinking about it, drawing sketches, making models for the giant figures. And what about the months in Carrara, cutting the marble blocks out of the mountain? He had even roughed out a couple of the statues in Rome. No wonder he had almost gone mad with rage and disappointment when the Pope suddenly called the whole thing off.

Now here was Julius, older and softer, ordering him one more time to do his tomb. It was a sheepish admission that he had been wrong to cancel the project in the first place.

“A tomb that magnificent takes a long time to complete,” Michelangelo told him with a touch of schadenfreude.

“Do you mean that I will croak before it’s finished? Well, then I will croak. What matters is that you live to finish it. They can always stash my old bones somewhere until it’s ready. I’ve set aside ten thousand crowns for the project. Do you think we can do something respectable with that?” 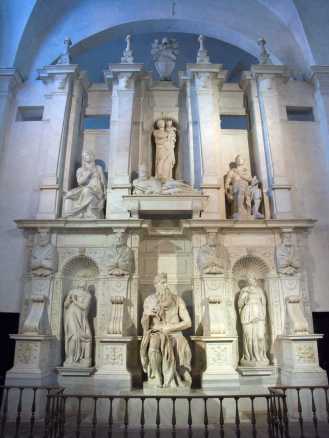 The tomb of Pope Julius, in San Pietro in Vincoli, Rome   (photo by Jean-Christophe BENOIST under GNU Free Documentation License)

Here was Julius back with his big-time projects. Michelangelo excitedly described for him the fabulous tomb. He knew it all by heart: Julius had given up the tomb project years before but he never had. He was too fond of it to let it go. “I will do something worthy of Your Holiness,” he said.

The Pope smiled to see Michelangelo’s old enthusiasm come back. “Fine,” he said. “I knew I could count on you.”
He dismissed him abruptly, though with an apology. “I hope we can see each other again, my friend.” Michelangelo watched the Pope’s servants help the old man rise from his chair and walk away. Tears came to his eyes as he realized that this was perhaps the last meeting with his great patron.
..