Peek Inside a Renaissance Art School 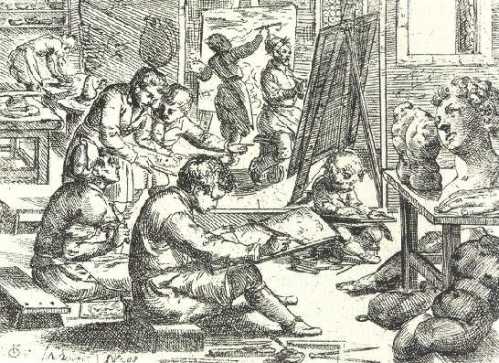 It is Tintoretto’s own studio. The original drawing was made by one of his helpers, Odoardo Fialetti, and was copied and used as an illustration for the first drawing manual* ever published in Italy (1608).

Here is a peek into the sort of school that all the Renaissance masters attended. As you see, it is a very busy place. There are students and helpers of all ages—one of them is just a child.
An older student helps the beginners and corrects their drawings of the plaster casts. A shophand kneads clay or grinds colors. The old master sits at his easel while a helper prepares another big canvas or finishes some area the master has left to him.
“Find a good master,” an old artist’s manual advised apprentices, “and then stay with him as long as you can.”

6 Responses to Peek Inside a Renaissance Art School